One of the more familiar Native American tribes of the Southwest is the Navajo tribe.  This is probably largely due to the fact that the Navajo are the largest Indian tribe in the United States and live on the largest reservation in the U.S., which covers the four corners area of the southwest: Arizona, New Mexico, Utah and part of Colorado. While the Navajo share a language with the Apache—Athapascan—they are not part of the Apache Nation. The Spanish gave the Navajo name to them but they identify themselves as Dine, which translated means “the people.”

According to American Indian history, the Navajo tribes migration from the north can be dated back to 1025 A.D.  Feared by other Indians, the Spanish, Mexican, and American settlers, the Navajo earned their reputation by raiding other cultures for food, property, women and slaves.

Over time, the tribe learned to farm, mold pottery and develop new basket-weaving techniques. Art served as a bridge between the natural and supernatural worlds and a way to relate to spirit beings. 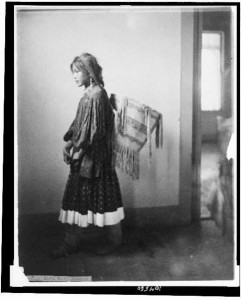 Evidence of Apache bands arriving to the southwest can be dated to 825 A.D. In the past, Apache Indians were a very powerful people and considered to be fierce warriors and skilled tacticians. Their food was acquired through hunting and gathering and later growing domestic plants and trading or raiding other cultures.

The Hope tribe is another well-known Native American tribe of the Southwest. The Hopi name when translated means “peaceful ones” and in their own language they call themselves Hópitu-shínumu, which means “the peaceful people.”

Now settled in northeastern Arizona, surrounded by the Navajo reservation, the Hopi are known as Pueblo Indians who most likely descended from the Anasazi. One village, Oraibi, is one of the oldest continuously inhabited villages in the United States.

Mainly horticultural people, the Hopi would supplement their diet with hunting a gathering when necessary. Hopi are known for their basket-weaving skills and their methods have not changed in hundreds of years.

Originally, the Zuñi lived along the northern bank of the Zuñi River but today their territory is located in New Mexico near the Arizona border. In their current location, the tribe can be traced back about 800 years.

Most of their food supply comes from farming however they supplemented their diet by hunting and gathering. The Zuni and Hopi Southwest Indians carved dolls, called Kachina dolls, out of wood. The dolls were decorated with masks and costumes to represent the Kachina spirits.

Native Americans of the Southwest consist of many tribes, cultures and beliefs but each tribe has a distinct identity. They show their individuality through the beautiful pieces of art: pottery, clothing, baskets and jewelry.  Native Americans of the Southwest are very spiritual tribes who express their beliefs, dreams and visions through symbols and art. Common in all the Southwestern Indian tribes is the use of turquoise. The stone is considered to bring health, happiness and good fortune.